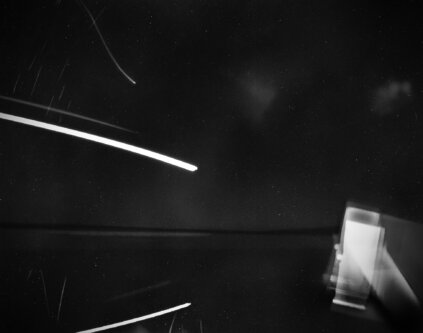 A twelve-hour exposure in a National Park night sky

Recently I came across a story I wrote about this one photo made in a Dark Sky Park and suddenly felt sorry for not sharing it. Besides, I needed to write a new blog post because it was such a long time since I published one. So here is the story.

In 2019 it was 50 years ago that the Lauwerszee, an inland sea north of the Netherlands, was closed off and turned into a lake.

After the 1953 flood, the government decided to tackle the Netherlands’ coastline. The estuary was closed because that seemed the best solution at the time. It all happened under protest from the local shrimp fishermen as they depended on the sea for their livelihoods.
No one predicted that this area would become one of the most beautiful nature reserves in the Netherlands. It is the right combination of scenery, stunning wildlife, plenty of space for recreation that makes the area unique.

Because of the 50th anniversary of the lake, northern Dutch photographers showed their views on this beautiful Nature Reserve.

I took the challenge because the area connects with the Wadden Sea, where I often take pictures.
The submissions of 15 photographers resulted in a special in the magazine Noorderbreedte and an outdoor exhibition on location produced by Noorderlicht. There was also an exhibition of the images at the University Medical Center Groningen.

I was interested in the fact that the area was designated an official Dark Sky Park in 2016.

A Dark Sky Park is an area where it is dark and where the goal is to preserve that darkness. Dark Sky Parks are among the darkest places in the world. Here, you can experience nature in the dark, and people are welcome at night to enjoy that darkness and the starry sky.
The Dark Sky Park designation comes from the International Dark-Sky Association.
This organization is American-based and draws attention to the worldwide increasing light pollution.
The International Dark-Sky Association does not require that it be pitch dark but that people remove the unnecessary light as much as possible.

At first, the light pollution was too high, but they resolved that.

For example, they installed new luminaires that emit less light in some places. That is why we can now experience nature in the dark. The darkness is under protection, which is good for the nature in the area.
Too much light affects, among other things, birds, plants, and moths. Artificial night light changes the natural light-dark cycle. The appointment as Dark Sky Park is special because the Netherlands is one of the countries with the most light pollution in the world.

For a long time, I had the idea of capturing the moon’s orbit.

This, in addition to photographing the path that the sun describes in the sky during a day which I had been doing for quite some time. Here was the perfect opportunity.
They designated five places in the area where people are welcome at night and where you can walk under the stars. There was a park with holiday homes nearby at one of those places. Here I decided to make an image with an entire nights’ exposure time. I based the choice of this location on practical considerations. The exposure had to start and end in complete darkness; otherwise, the image would be overexposed. Simply because this place was still close to civilization, I felt the safest here in the dark.

I used the first clear night to make some test shots.

When they were ok, I had to wait another four weeks. Clear nights are rare in Dutch winters.
Sometime in February, just before the deadline, the time had come. At 7 PM on February 23, I placed three pinhole cameras in the dark, all pointed at the moon. I removed the sticker that closes the pinhole from all three cameras to start the exposure. With one camera, I had a problem getting the sticker off. It was too dark, and I could hardly see anything. My then 9-year-old son, who always likes to go with me on these kinds of adventures, suddenly made some light with a smartphone. He meant to be very sweet and helpful, but I was so sure that this particular image would fail because of it.

Before dawn, I removed the cameras and went straight into my studio to develop the negatives.

I left the photo exposed by the light of the smartphone undeveloped. But the others were, disappointingly, seriously underexposed. I had to develop the other one to be sure.
I could not be happier when it turned out that this was the only good image that I had produced that night.
The image shows the path that the moon describes across the night sky and its reflection on the water.
The other streaks of light are probably planets. You may not be able to see it correctly, but the white dots are just specks of dust on my scanner. Usually so annoying, but the stars are formed by dust in this image, just like in real life.

You can click on the image to see a larger version.