Skip to content
Previous Next
History of the pinhole

The history of the pinhole 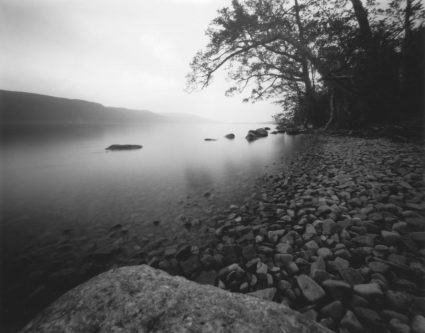 A historique technique
Using the pinhole technique is one of the most authentic ways to record photographic images.
The technique is based on the principle of the camera obscura which is centuries old. Basically it’s nothing more then a lightproof box with, in the middle of one side, a tiny little hole instead of a lens.
The light works its way through the pinhole right into the enclosed room and that is how at the opposite side of the pinhole an image appears which is upside down.
We can preserve the image by putting material which is sensitive to light at the side where the image shows up and develop it after exposure.

However photography was only invented in 1839 the principle of the pinhole has been known since ages.

As early as the 4th century B.C. this phenomenon was mentioned by Aristotle in one of his writings. Light falling through a small opening between the leaves of a tree gives a perfect projection of the sun on the ground. Even though the opening between the leaves has a shape which is irregular and is not perfectly round, yet the image on the ground is. Aristotle could never explain this. This happened much later in the 16th century, because scientists were frequently experimenting with the pinhole technique.

All this started in the 13th and 14th century.

Different scientists used the pinhole principle in order to study the eclipse of the sun and the wavelength of the light.
In the 15th century the technique was used by artists as an aid to make their drawings.
Leonardo da Vinci was the first to hit upon the idea of using a box for it. He described how one could get an image on a transparent screen and trace it on the outside. But it was not until the 16th century until this idea had come to its full development.

Lenses existed in this century but people still used the pinhole principle to study the sun.

Scientists often stared through their (pinhole) telescopes and looked directly into the bright sunlight. As a result they suffered from blindness. Just to spare the eyes, scientists started to use a camera obscura (darkroom) so they could study the projected image of the sun instead of looking at it directly. From this moment on it didn’t take long before artists started to use the camera obscura frequently.

In the 18th century the principle of the camera obscura becomes generally known and even travellers are starting to use the phenomenon.

They are using the portable version of the camera obscura just to trace the things they see during their journeys. These “snap-shots” are pasted into their book of travels and kept as a souvenir. If people didn’t possess a camera one payed money to enter a permanent camera-room. Here the surroundings could be seen by means of a rotating mirror. The moving images were projected on a white table. You can still visit such a permanent camera-room in Edinburgh, a real magic experience.
All this was very popular until the official invention of photography in 1839. From this moment on there was no need to trace images anymore and the pinhole principle was completely forgotten.

Until the most famous pinhole picture of that time showed up, a photograph of 1890 from George Davison, The Onion Field.

This picture won the highest price at the annual exhibition of the Photographic Society in London. This particular picture was the beginning of the popularity of the pinhole camera which would last for several years.
There were some american companies that put pinhole cameras on the market and even a special pinhole disc that could replace the lens of a regular camera.

From the 20th century the pinhole camera lost popularity.

Making images with a camera like this was considered to be inferior. The reason of this was most probably the growing need for speed and mass production of photographic equipment. Finally the principle was only used to teach people the basic techniques of photography. Between 1940 and 1960 the pinhole technique was completely forgotten.
From 1960 until now pinhole photography is being used sporadically by artists.