Plastic Soup
I’m not someone who leaves rubbish behind, not in the city and certainly not in nature.
But I have to confess something. Last february I made this image for the exhibition “Improvisaties op wind, water, Wad” in Museum Belvédère. We had a spring break but it was still very cold.
Fixing the camera, using gaffer tape, was extremely difficult. I tried to fix the camera in between some barbed wire which was very thin, there was a lot of wind and my hands were freezing. Above all, I was afraid that my subject, the poor dead goose that was stuck between the barbed wire, would fall off.
So it took me a while and in the meantime I had to use a whole lot of tape to do the job.

Two days later I went back to pick up the pinhole camera.

This time I took my five year old son with me. We had to pick up four cameras that I had set up. First we went to a place called Wierum where we picked up two pinhole cameras and also spend some time searching for pretty shells.
After this we drove to the other place called Paessens-Moddergat. By the time we got there it was even colder and more windy then two days earlier and unfortunately it started to rain as well.

Finally we reached the camera that was aimed at the bird and attached between the barbed wire.

I told my son to wait on a dike while I was trying to find my way through the mud and a layer of water, being careful not to sink.
In the meantime my son was standing there yelling at me to hurry up because he was cold.
Only there was a small problem because my fingers were also cold and therefore I was not able to loosen the gaffer tape. The tape was wet from the rain and had become slippery as a result.

After ten minutes of trying the camera came loose, only there was still quite some gaffer tape stuck to the wire.

It did not come off so I left it. Something I have been feeling guilty about ever since.
My son learned at school about the plastic soup in the sea and I regularly saw this films of plastic-eating plankton passing by on social media.

After a few months I decided to go back to the place to see if the tape was still there.

The bird was completely gone but the tape was still there. This time I had a pair of scissors with me and finally I managed to remove all the tape.
There were other people around who looked at me like I was crazy. But I was only happy that it wasn’t there anymore.

From now on a good pair of scissors is a regular part of my equipment.

In Urban Exploration Photography they say: “Leave nothing but footprints, take nothing but photographs.” And so it is.
But apart from the tape even my footprints are completely gone by now because grass is growing over it. That is what time does. All that remains is the one image I made. 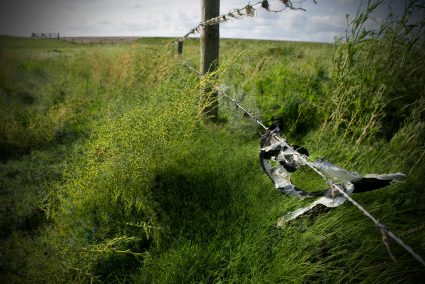