The echo of the landscape 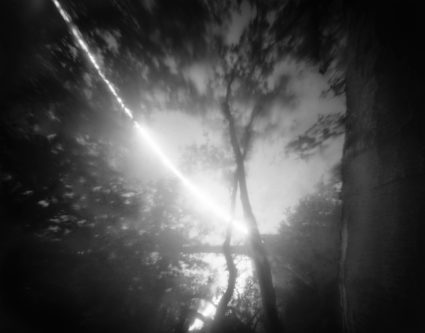 A story for Valentine’s day
Last weekend I wrote a little story for my newsletter subscribers.
When I finished writing and read through the story again, I suddenly realized I had written a blog post here.
Normally I like to keep things separate and write different content for my blog and newsletter. Now I make an exception just this once.

So I couldn’t miss out on the opportunity to show you this image and tell you the story behind it.
Actually, I’ve never done anything with this picture except that I put it on Facebook and Instagram once.

The image was made a few year’s ago for the series Timeline.

Although I was happy with this image, I thought it wouldn’t fit in the series at the time.
So I put it on a hard disk somewhere, and that was it.
Until I suddenly thought about it last week and decided to share its story with you.

I made the image a few years ago in a natural area close to where I live.

It’s called Friescheveen, which is a fairylike fen area with a lake, swamp forest and many reeds.
I often go there with students for a landscape photography workshop.

It took me hours to find a place to put my camera up for 48 hours when I saw this scene.

I focused on the two trees.
The white line is the path that the sun describes in the sky during a day.
According to the Sun Surveyor app that I was using, the sun’s path would end up exactly in the place where the trees intersect. As often happens when I take pictures, this was not entirely the case when I first saw the result. Something obviously went wrong in measuring the path of the sun.
It’s not that I wasn’t happy with the result because I was, but it was just different than I thought it would be.

Let me take you back to the day I picked up the camera after 48 hours.

It was on a Sunday afternoon, a beautiful day in late spring. I took my son, who was 4 years old at the time, with me.
We parked the car and took a 20-minute walk to where I had put up the camera.

I had fixed the camera to a tree with duct tape, and I had put a little note on it asking people not to touch it.

When we arrived at the place, a family was looking extensively at the camera. They were really kind people, and we had a nice conversation there for about 10 minutes. Only to find out the next day that our children are going to the same school. So many nice conversations followed.

Then my son and I took the walk back to our car and ran into a couple with a bigger boy with Down syndrome.

The boy saw my son, who was still very little, and instantly fell in love with him. He stood still in front of him, looked and then gave him this big affectionate hug. My son was totally okay with it and just let it happen.
The other parents and myself were visibly touched by this unprejudiced and sudden bonding of these two boys.
Now a few years later, I still remember this scene vividly.

The next day I developed the negative, and I was completely stunned by what I saw.

The shape of a heart in the foliage, the trees in the middle seemed to embrace one another.
Just a picture of a landscape but one which echoed the events of the previous day.
That’s why this image has always been very precious to me.
Happy Valentine’s Day!